Vivacitas was co-founded in 2015 by Dr. Rubinfeld with an eye toward re-designing well known chemotherapies that have already been demonstrated to have beneficial effects, but which may also possess potency, toxicity, stability and/or pharmacokinetic issues that limit their use. To this end, the Company has been laser-focused on acquiring its 3 mature pipeline assets, made possible by leveraging the extraordinary professional network that 'Dr. Joe' fostered over a lifetime in the industry. As a result, Vivacitas was able to complete the acquisitions of its 3 major programs within a 12-month period.

Contributing to the impressive asset acquisition track record is Vivacitas' close partnership with International Infusion Advisors, LLC via its investment arm, Infusion 51A, a relationship that is anchored in a common mission - to develop disruptive technologies aimed at improving the quality of life of cancer patients.

Vivacitas' assets are organized into two separate, yet related Platforms:

Vivacitas' intention is to bring its programs through later stage clinical development to the point of Phase III completion and NDA submission, and will seek experienced bio/pharmaceutical partners to commercialize the products. To this end, the Company enjoys an unusually rich pipeline of post-Phase II assets that are positioned to return both near- and long-term value to patients and their families, as well as our visionary stakeholders. 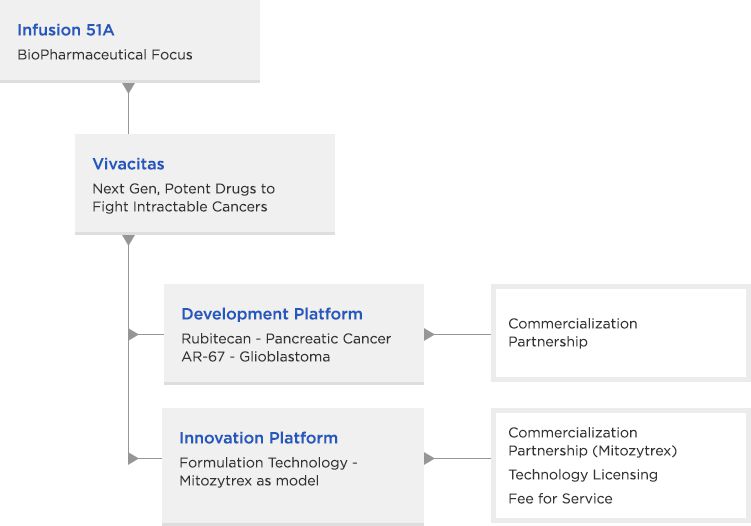